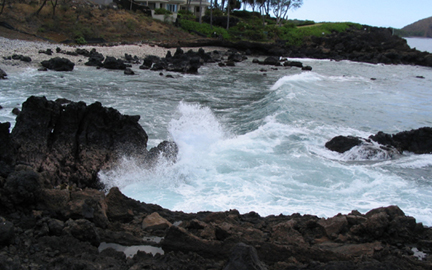 One of my WIPs begins with a scene taken from my first storm on board Sea Venture. We’d moved the boat from the CA Delta to Marina Bay in Richmond, CA. The wind and waves had direct access through the Golden Gate to our slip. Michael was late returning from work that night when a whopper of a storm raised its furious head. As I lay in my bunk, shuddering along with Sea Venture, I imagined what it might be like for a novice sailor (because if I were scared, how much more would she be?), alone on a boat in a strange country. So I moved my character to La Paz, MX (one of our favorite cruising grounds in the Sea of Cortez), named their boat Mystic, and gave the area a new marina.

Here’s the opening to On a Night Like This:

Waves crested Marina Algare’s finger piers, dousing the dock and anything—or anyone—still roaming abroad that night. The slaps echoed like the beat of bass drum on the uninsulated fiberglass of Mystic’s transom, and Kyra snuggled deeper under the summer-weight blankets. She longed for brick and mortar, for solid ground and the strong foundation she’d left stateside. Instead, mere inches separated her from the banshee’s fury.

Halyards flogged the mast. She should have lashed the lines before the storm hit, but how could she have known they’d be a problem? Preparing the boat had always been Stephen’s job. She winced as something thudded into the hull, once, twice. The wind howled, screeching through the rigging. Kyra flattened a pillow against her ear.

She’d been through plenty of storms in the California Delta where the inland heat sucked wind off the ocean and sent it surging up the rivers. There, tucked behind thick walls and curtained windows, she’d felt safe, immune from violence. When the weatherman warned of high winds, she had only to check the flashlight batteries, make sure Stephen had filled the generator with gas, and then slip into something comfortable before turning on a movie. Or curling up to read. Or going to sleep. Being alone wasn’t a problem in Rio Vista.

But she wasn’t in her California house, was she? Thanks to Stephen, she was on a boat in Mexico, their new home, he’d called it when he’d enticed her here—before abandoning her to face what sounded like a hurricane.

A sob clogged her throat. If he were lying next to her, he’d laugh and rub a hand up her back, his long fingers tickling her slightly before they inched toward her tense muscles. He’d remind her, in his low and soothing voice, that even if the wind piped to sixty, Mystic was a good old girl, well able to handle a storm. Kyra could imagine his chuckle. “Poor Kyra, so nervous. What is there to worry about?” He tell her that they’d head to sea if the wind got to near-hurricane force and heave to. Mystic wouldtake care of them. “And besides,” he’d insist, “The Lord watches over us.”

She leveled a curse at his missing form, though after that last thought, the curse felt dangerous, as if she’d spooked herself and her circumstances. Too bad she didn’t have Stephen’s faith—in either the boat or his God.

Lying in the dark, she had no idea how hard the wind blew, but it was loud and bad and nothing she wanted to be in the middle of, thank you very much. Everything Stephen said made sense when he was here and in charge. But he wasn’t, and she had no idea why not.

When another gust rocked the boat, Kyra started, thinking it might be Stephen’s weight causing the lurch. She listened, but no footfalls moved aft.

What good were promises if he were off gallivanting around Mexico instead of here to keep them? She couldn’t take a forty-five foot boat to sea on her own. She had to stay tethered to the dock and hope that the lines held and the pilings were strong and no other boat got loose to crash into them.

If he’d decided not to drive back from Cabo because of the storm, why hadn’t he called? He had a cell phone, and, surely, Cabo San Lucas had decent service.

She flipped on a light to check the signal strength bars on her phone’s screen. Five. So, it wasn’t a fault in La Paz. It didn’t make sense. Stephen was always so careful with her. Knowing how nervous she got when he didn’t call to say he’d be late, he always phoned. Hitting speed dial for his cell, she waited, then left her second panicky voice mail. “Where are you?!”

For his sake, she tried praying, but it felt as if the noises outside drowned her words—even though she didn’t speak them aloud. The heavens seemed too busy pouring down rain to bother with one lone woman in a dark and very foreign marina. Fine, she and God weren’t on the best of terms, but Stephen kept saying God listened.

Finally, sometime in the night, the storm quieted. But she still lay alone with a phone that didn’t ring.